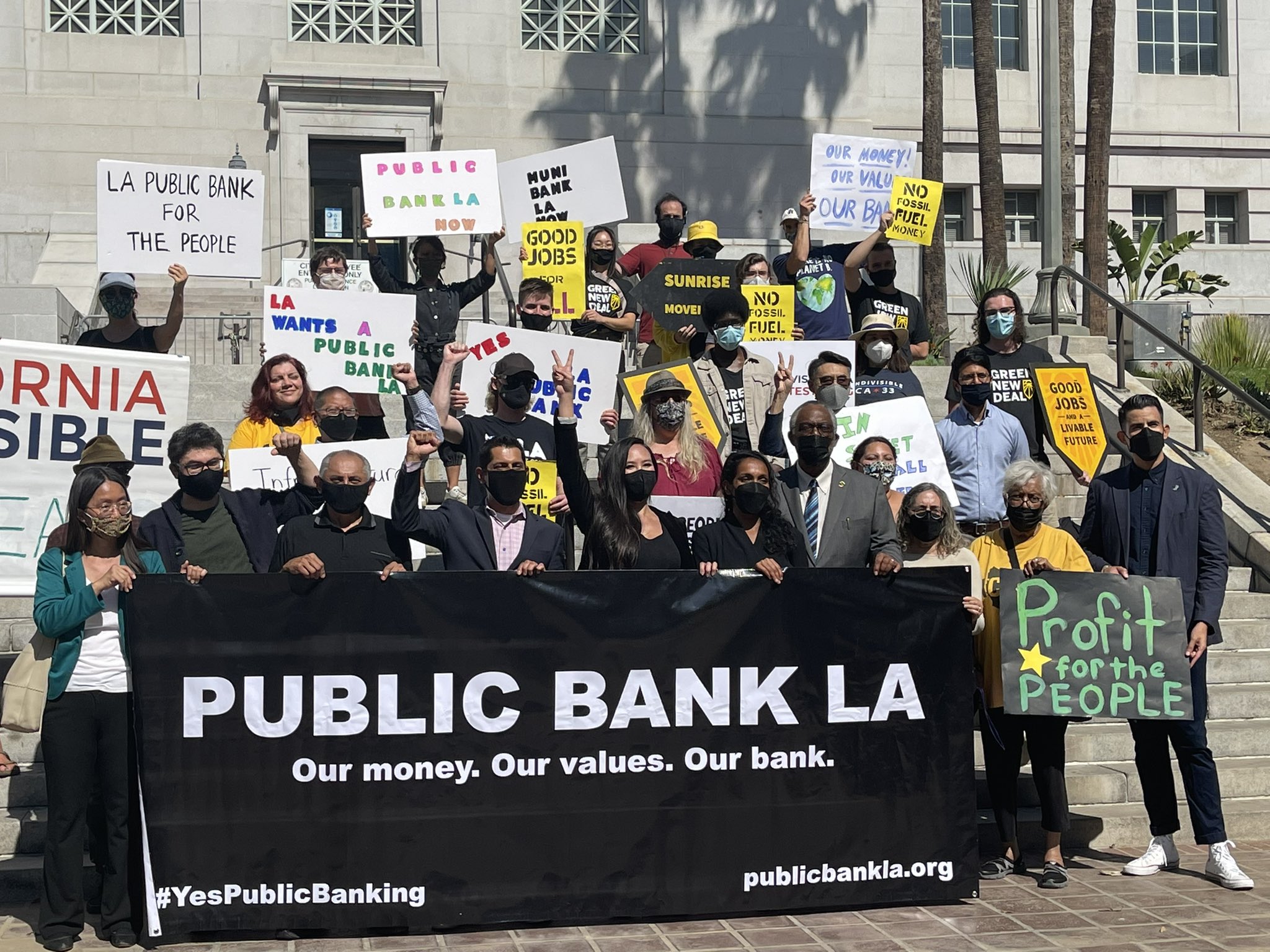 The potential of public banks – or the management of taxpayer funds through state-controlled financial institutions rather than private banks – became real to me in my city councilor’s office in the spring of 2019. A group of us had spread out through City Hall to speak with each member of council about the benefits of establishing a public bank in Philadelphia. The staff member we were chatting with was new to the idea and more and more interested. â€œThe person from the Council would really like this idea,â€ he said. â€œIt’s good for ordinary people. It’s good for the city’s budget. I’ll talk to her about it. I think she will want to support him. At that point, the concept of a public bank, which I found compelling and had been informally promoting for years, became not only another good idea, but an achievable goal.

Knowing how to organize the best around economic issues has been a headache. Once we have identified our economic system – and more specifically the financial system – as the root of so many of our problems, what do we do next? Transforming the economy is too important to easily build campaigns, and the number of people who can be mobilized for purely ideological motives is small. While Occupy Wall Street was an excellent national teaching on wealth inequality, including a critical understanding of the importance of democracy, it didn’t offer enough direction or agenda to keep people moving.

â€œRevolutionary reformâ€ is like a wedge in the power status quo, and I see public bank campaigns playing that role.

With an eye open to the possibilities, I jumped at the opportunity to attend the founding conference of the national public banking movement, held in Philadelphia in 2012. The idea that our public money should be kept under. public scrutiny and used for the public good, rather than deposited in private banks to be used for private purposes, was compelling. The reality that we have our own model of public banking – in North Dakota’s century-old state bank – was ingrained. We were all blown away by a 12-year-old Canadian who told the story of his country: how the creation of a national bank in the 1930s enabled it to build essential social, health and economic infrastructure; how a political change in the early 1970s transferred control of this wealth to the private sector; and how billions of dollars that might otherwise have been used for the public good have since been diverted to private banks.

This is the situation we are facing in the United States. Currently, private banks create all the money in circulation – with the exception of notes and coins issued by the Treasury – by making loans. The Federal Reserve is a network of private banks having a privileged relationship with the Treasury. Interest on our growing federal deficit is paid to the banks that hold treasury bills. When banks get “too big to fail,” our taxes bail them out. It is clear that we must address the control of the money supply in order to solve a multitude of social, equity and climate problems. Yet where can we get the leverage to effect such a massive transformation?

The distinction between revolutionary and reformist reforms can help us here. The revolution could be presented as the transformation of our monetary system from a private, for-profit management system to a democratically managed public service. Visionary federal legislation to do this has been proposed, but the framework is too abstract to attract popular support. We can’t go from here to there without a few steps in between.

There are many things we can do to make our current economic system more bearable and fair in the context of the current system: raise the minimum wage, oppose predatory lending, strengthen the social safety net. These â€œreformist reformsâ€ are all important and well worth implementing. And any reform that creates solidarity and grassroots momentum helps create the conditions to demand more. But in themselves, they do not question the power dynamics that are embedded in a system that favors the accumulation of private wealth to the detriment of all other life on the planet.

â€œRevolutionary reformâ€ is like a wedge in the power status quo, and I see public bank campaigns playing that role. They provide a tangible local hook around which to organize, while challenging the fundamental problem of power and control. They get people thinking about the big questions: why should our taxpayers’ money be held by private banks to be invested in their own interests when we have urgent needs at home? Why should half the cost of long-term government borrowing be spent on paying interest to private bondholders? Why don’t we have control over our common wealth? A public banking campaign does not go to the end. It does not directly call into question the rights of private banks to essentially own the money supply of our country. But it is a clear step in that direction, and one that ordinary people can be excited to take.

A reform, revolutionary or not, remains a reform. But it is more than just improving the conditions of those who suffer in our current deeply inequitable and unjust economic system.

The potential of public banking as a popular problem was clearly highlighted in Los Angeles in 2018. This story began with an earlier activist campaign to get the city to divest from fossil fuels. Voters approved the move, but the city discovered that any bank big enough to handle its money was complicit in investing in fossil fuels. There was nowhere they could move the money. The chairman of the city council acted that summer to put a referendum on the fall ballot to establish a public bank. With just a few months to organize, the divestment group turned to an all-out campaign to support the referendum. They carried out an awareness and social media blitz and gained the endorsement of hundreds of civic, labor and other community groups. Measure B received over 44% of the vote, with 430,488 Angelenos voting yes to a public bank. It was not enough for a victory, but a stunning achievement of a grassroots campaign led by volunteers with minimal funding – and it laid the groundwork for a series of strides in building a structure. to create public banks throughout California.

When I got involved with the Philadelphia Public Banking Coalition and started talking with people all over town about the potential of a public bank, I had the same experience of people who understood right away. They just never thought there might be an alternative. We hosted a briefing with the Philadelphia Urban Coalition, a group of mostly black religious leaders, which resonated strongly with the message that it is just not fair for the big banks to use our public money to maximize their profits, while the great needs of the city are unsatisfied for lack of financial resources.

Several of us went to our local farmer’s market a series of Saturdays until the following summer, collecting petitions for a public bank. Everyone who was willing to speak not only understood the logic of the concept right away, but were grateful to know about the campaign and eager to support it. Later, when we reached out to local community organizations to offer information sessions, the concept always had an intuitive meaning.

Fortunately, our coalition not only engaged in community outreach efforts, but also worked inside City Hall. From the start we have had a strong ally in City Council Member Derek Green and have worked closely with him over the years. One of our members who worked as a legal advisor to city council actually drafted the legislation Green introduced in January 2021 with a veto-proof majority – the result of a vigorous lobbying campaign on our part. Since then, we have continued our dual strategy of gathering more support from the community and working with Town Hall Legal and Financial Services to clarify the details. We are working especially hard on building a democratic governance structure, to ensure that the bank is not only free from political influence, but rooted in the communities it is meant to serve.

The public banking movement across the country has seen a bottom wave since 2019, and it continues to rise. The question now is not whether there will be another US bank joining the Bank of North Dakota, but when. Philadelphia joins the California Bay Area and Los Angeles in a race to establish our first municipal public bank. After years of dreaming and hard work, the goal of having legislation in place by the end of 2021 seems like a real possibility.

Of course, this is not the end of the story. A reform, revolutionary or not, remains a reform. But it is more than just improving the conditions of those who suffer in our current deeply inequitable and unjust economic system. It is an opening, the beginning of a transfer from private to public control of our financial system, a change in the history of who legitimately owns and controls our common wealth.