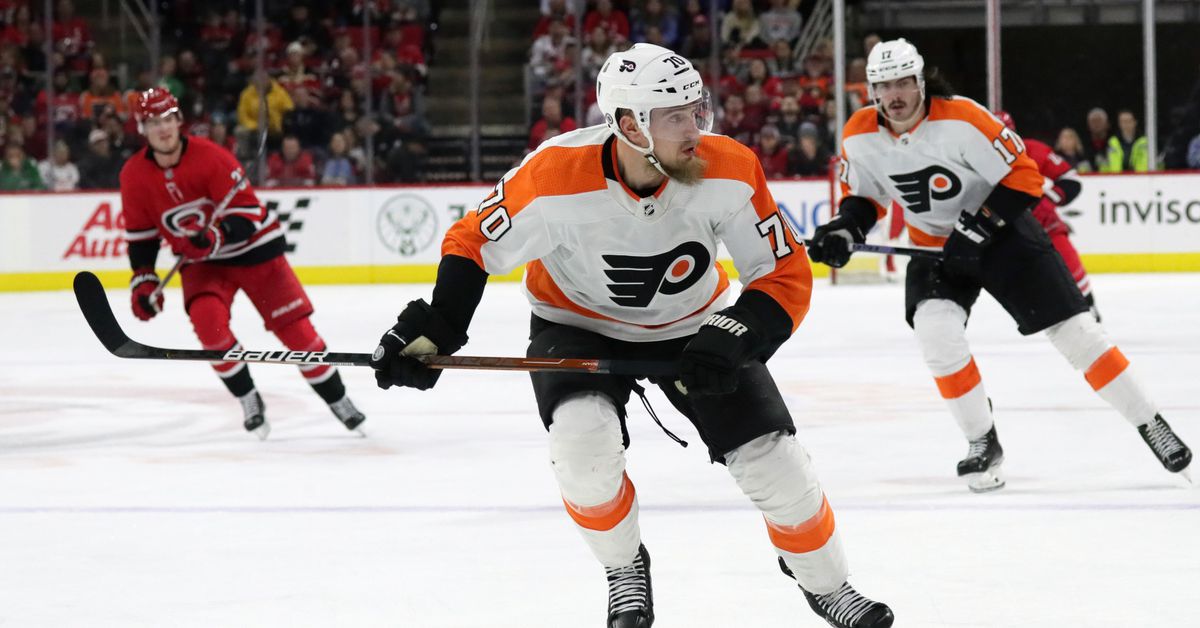 It’s a big weekend around here, folks! The Flyers’ mini road trip continued yesterday afternoon with a stop in Raleigh to face the Hurricanes, and the road has still not been very kind to them. They stayed here for a while, but they couldn’t hold them back completely. They gave up the game winner to put the Canes late in the third period to put them up 2-1, then dropped the empty net to finish 3-1. Alas.

And let’s get straight to our notes, because guess what! We have a whole other game coming up after this one tonight.

All stats via Natural Stat Trick.

Although the score is pretty close in this one, we don’t really come away feeling like it was a good game for the Flyers. The Flyers had a lot of trouble with both the Hurricanes’ speed and the aggressiveness of their forecheck, and at first they were getting next to nothing on offense, the Canes looked like they were scattered. They settled down a bit as the game progressed, but that doesn’t mean things have completely worked out for them. Their offense came in flurries and the Canes got the better of them pretty much from start to finish. Overall, at just 5-5, the Hurricanes beat the Flyers 63-38 in shot attempts and 2.66-1.51 in expected goals (good for the score-adjusted differentials of 38.35 and 37 .57 respectively for the Flyers). Which is to say, the Flyers offense never really got going in this game, and that hurt them.

An eventful afternoon for Derick Brassard

The little to score the Flyers got, well, that was a little odd. It looked like they had broken through when Cam Atkinson got a rebound, but that goal was quickly disallowed because Derick Brassard carried Freddie Andersen a lot, and it was goalie interference.

But no matter, Brassard took personal responsibility for scoring this first goal for real. On their very next shift, he beat the Hurricanes defenseman to a rebound and chipped the puck past Andersen to tie the game.

It was a nice way to score his 200th career goal, if we do say so ourselves. And Brassard in general did well in his new assignment on the first line with Atkinson and Giroux. It’s nice to see him holding up well physically (*banging hard on wood*) and also getting some production.

While the Flyers offense struggled to get off the ground and the team still managed to stay in this game for as long as they could and did, the key factor in that, of course, was Martin Jones. When it was announced that he was given the go-ahead to start this one, there was a bit of anxiety, just for the fact that it’s a big ask to throw in your substitute goalkeeper who hasn’t played a lot this season. against one of the best teams in the league. And all the credit in the world goes to Jones, because he absolutely seized the opportunity in this one. He didn’t have an easy night, facing 35 shots in total, and he stopped all but two of them (and those two goals against, he didn’t get much help from his defense, let’s say that). But overall it was another pretty solid performance for Jones – he made some big saves when the team needed them, and he did just about everything he could to keep them all in the game. . It’s hard to see him not getting the results for that one, but that’s how things have been this season.

What a way to lose it

Even though they were fired up by the numbers in this one, the Flyers were still technically in this one until the end, but they just couldn’t avoid shooting themselves in the foot. How they lost this one, frankly, was pretty embarrassing. They gave up the game-winner after Provorov turned the puck over on a weak punt attempt that the Hurricanes pounced on to stay and maintain their offensive pressure. And then the Flyers went with an early goalie with 2:40 left in regulation, trying to tie the game, had plenty of time to work with it, and then couldn’t complete a passing streak or keep the puck in the offensive zone to save their lives. They looked scattered at the end, and they just couldn’t seem to get out of their own way. The Hurricanes are a very good team that gave them a lot of trouble throughout this one, but the Flyers have no one to blame but themselves for how this one ended.

What are we doing here?

Alright, before we go, we have a little thing to discuss. Speaking about Morgan Frost reappearing before the match, Yeo was keen to say that this is going to be a great opportunity for him to play with more skilled teammates than the ones he had to work with in his last stint. And that’s the kind of stuff we want to hear: the team should put their players in the best position to succeed.

But, in practice, we haven’t seen that play out to the extent we might have hoped. Frost hasn’t had time to work with the power play, despite the fact that his prowess should give them a boost on paper. And Cam York is still stuck playing alongside active disaster Keith Yandle – he started the third period alongside Ivan Provorov, but it only lasted a shift or two. And all of that might be minor, in the scheme of things, and you certainly can’t bend over backwards to form lineups around just two players, but there’s more that, in theory, could be done to help those two there. And if we keep seeing them not getting the best out of those two players, well, it’s not exactly a mystery why.