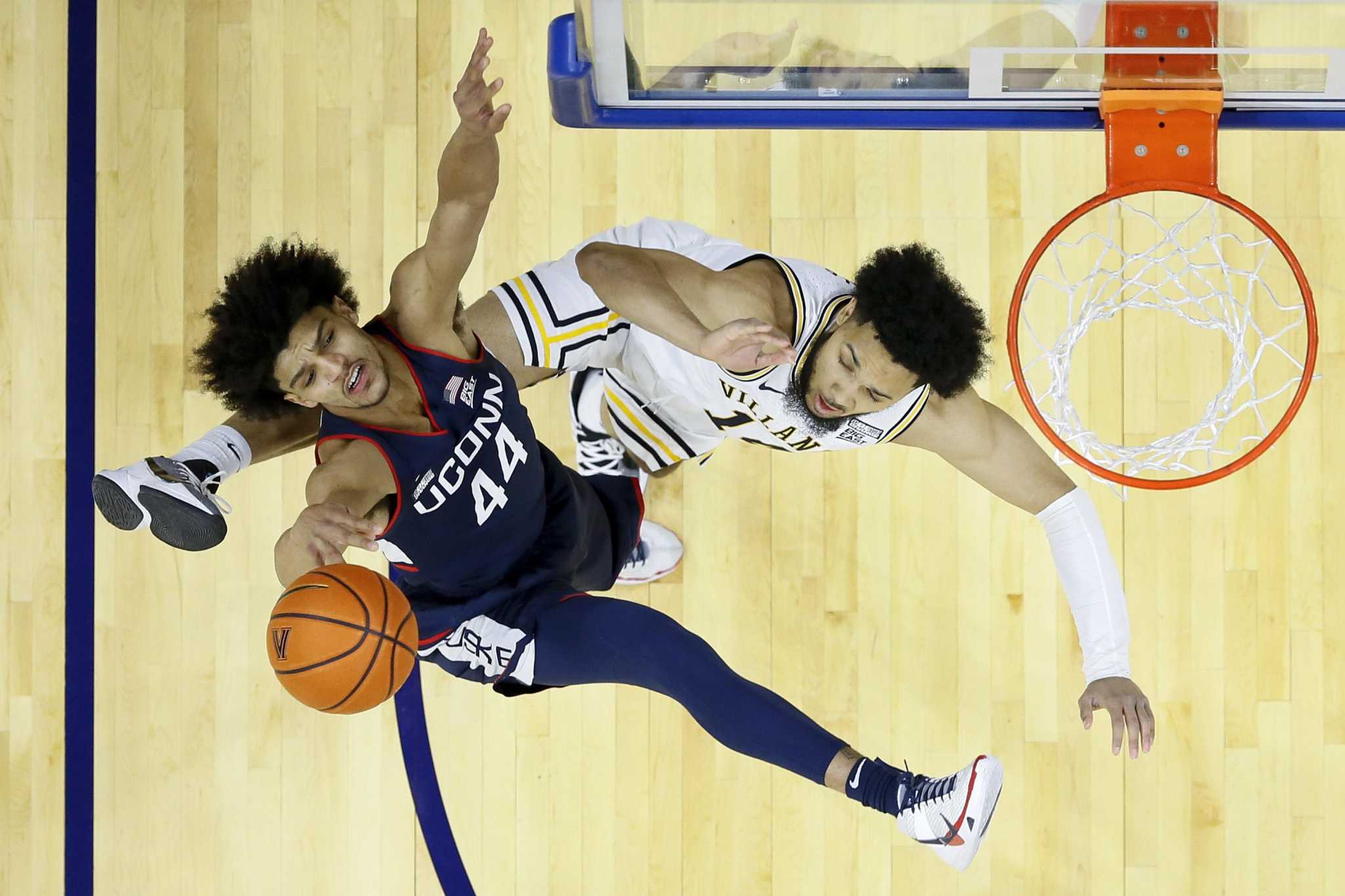 PHILADELPHIA — New rotations, no Justin Moore, even a half-court shot.

None of that mattered.

Once again, UConn struggled to shoot, especially in the first half, and often appeared disjointed at both ends of the pitch, making Eric Dixon look like second-comer Charles Barkley.

Once again the Huskies lost to Villanova. The 85-74 loss before 19,786 at the Wells Fargo Center on Saturday was the Huskies’ fifth straight loss against the Wildcats, dating back to 2018.

“I don’t think any particular team in our league is in our head,” UConn coach Dan Hurley said. “I don’t think there’s a team that we think we can’t beat. When you play at UConn, no brand you play against is too big for you. We just didn’t play well enough to win.

At times, this one felt a lot more like the first couple of those L’s at ‘Nova – at the end of Kevin Ollie’s reign and the start of Hurley – than the previous two. UConn shot 36% from the floor in the first half – and that included a half-court prayer from RJ Cole that cut the Huskies’ deficit to 11 (40-29).

“You have to ignore the half-court shot,” Hurley said. “We had 26 points at halftime.”

Praise the 17th-ranked Huskies for rallying and playing better in the final 20 minutes, at least offensively. After falling behind by 23 (67-44), UConn escaped and looked to be within seven (77-70) after Cole hit a 3-point corner with just two minutes left.

Alas, Andre Jackson was called for an offensive foul on the play and the basket was waved. Such a day for UConn (15-6, 6-4).

“A tough loss,” Hurley summed up. “Obviously we just didn’t play our identity defensively. And credit Villanova – they played very well. Their passing, their efficiency…I thought we were soft on the board. It didn’t look like the elite defensive team we expect it to be. Obviously it’s hard to win on the road. And you won’t win on the road if you don’t prepare your defense.

Truly, UConn couldn’t have picked a tougher opponent on the heels of a 59-55 upset home loss to Creighton on Tuesday. Villanova’s unique style and veteran craftsmanship is a tough combination for a team that might be a little lacking in confidence.

UConn, however, must recover quickly. A three-game week begins Tuesday with the visit of number 24 Marquette to Hartford. The Huskies then travel to face No. 21 Xavier on Friday before taking on St. John’s in the Super Bowl on Sunday at Madison Square Garden.

“We’ve got three games this week, so there’s no point in putting your head down,” Cole explained. “These are new opportunities for us to get three wins in this league.”

Early foul issues (two each on Adama Sanogo and Isaiah Whaley) hurt the Huskies in the first half, and Villanova (namely Dixon) took advantage. ‘Nova outscored UConn 20-6 in the first half paint going up to 14 points.

“The result had nothing to do with the refereeing,” Hurley said, “but I just couldn’t believe those two guys were committing real tricky fouls there. I thought it definitely had an impact.

“I was hoping it would breathe some life into the team,” said the graduate playmaker. “We went down a bit in the first half. Coming into the locker room, we just had to come out with a bit of an edge.

UConn’s comeback offer in the second half was highlighted by rookie Jordan Hawkins who knocked down 3 of 4 3-pointers for nine runs.

“If there’s anything I’m going to walk away from and not be devastating tonight at 3 a.m., it’s that we got Hawk going a little bit,” Hurley said.

Cole finished with a game-high 25 points and Sanogo added 14 (all in the second half), as did Tyrese Martin. Other than Hawkins, no one else did much.

“Some guys are still struggling offensively,” Hurley noted. “It affected our defense and we moved away from our defensive team identity (Saturday).”

Hurley specifically mentioned that Jackson and Martin weren’t playing hard enough on the wing, as well as the usual stalwarts Isaiah Whaley and Cole, who lost Gillespie a few times defensively.

“I can’t make those kinds of mistakes,” thought Hurley.

I can’t let it hang around either, with two more ranked opponents to come over the next six days.

“We have three games this week, we have to be ready to play on Tuesday,” concluded Hurley. “Villanova is a great program. We didn’t keep value (beep), and they outclassed us on the offensive side of the field. It’s a tough league, it’s tough to win on the road, it’s tough to win at home. We have to find this group and find our identity on the defensive and on the backboard.

“We have a very good team,” added the coach. “We lost a game on the road where they just kicked our (behind). We must be ready to leave on Tuesday. Hopefully we’ll have a crowd like this on Tuesday at our house, and we’ll play really well.

Hurley was hit with a technical foul after getting into a heated argument with an official midway through the second half. Asked about the “T,” Hurley referenced his brother Bob, the Arizona State head coach, who was fined for scolding umpires a few weeks ago.

Akok Akok (foot) did not play on Saturday. The junior forward’s 6-9 injury isn’t seen as something that will keep him out of the lineup for long.