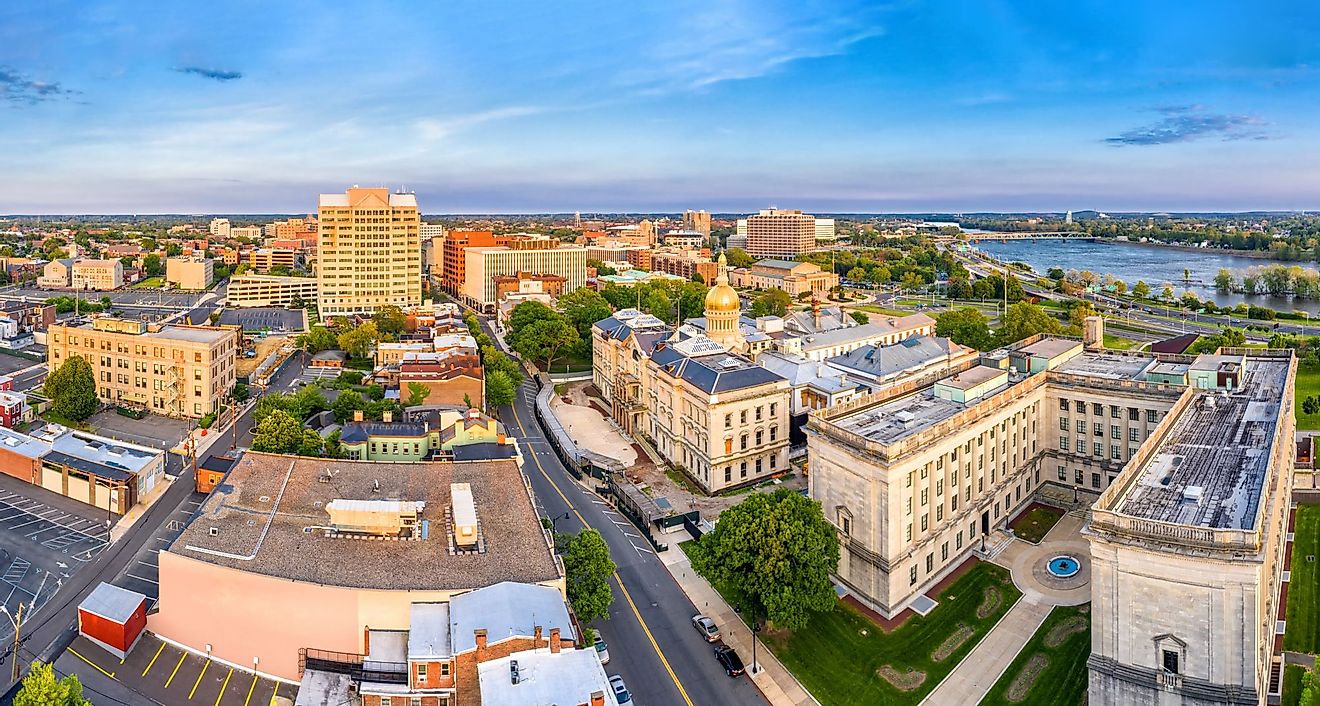 Trenton is a large city located in Mercer County on the eastern banks of the Delaware River in the west-central portion of the US state of New Jersey. Trenton serves as the state capital and is a historic city with a strong past and a bright future. Trenton is part of the Greater New York Combined Statistical Area. The city, which was once the capital of the United States, is bursting with culture and home to a variety of hidden gems, including spectacular museums and picturesque parks.

Geography and Climate of Trenton

Trenton is located 55 miles southwest of New York and about 28 miles northeast of Philadelphia, Pennsylvania. The New Jersey Turnpike, Interstate 295 and US Route 1 are the roads that connect Trenton to New York and Philadelphia. The municipality is home to the distinct communities known as North Ward, South Ward, East Ward and West Ward. Trenton shares borders with Mercer County’s Ewing, Hamilton, and Lawrence Townships, as well as Falls Township in Bucks County, Pennsylvania, Lower Makefield Township, and Morrisville, which is east of other side of the Delaware River. The Delaware River Joint Toll Bridge Commission looks after a number of bridges over the Delaware River, including the Lower Trenton Bridge, the Trenton-Morrisville Toll Bridge, and the Calhoun Street Bridge, which connect Trenton to Morrisville, in Pennsylvania. Assunpink Creek, a 22.9-mile-long tributary of the Delaware River, flows through the middle of the city and divides it into two parts. Trenton covers a total area of ​​21.25 km2, of which 19.63 km2 is land and 1.62 km2 is water.

According to the Köppen climate classification, Trenton is located in the transition zone between a humid subtropical climate and a warmer and humid continental climate (Dfa). In Trenton, the four seasons are nearly equal in length, and rainfall is evenly distributed throughout the year. Actual extreme temperatures are quite rare. Just over 1200 mm of precipitation falls on average annually. The best months are May and September, when average highs range from 20°C (68°F) to 26°C (79°F).

In what was then called the “Delaware Falls”, the first community that would become Trenton was founded by Quakers in 1679, under the leadership of Mahlon Stacy of Handsworth, Sheffield, UK. When Quakers were persecuted in England, North America provided the perfect setting for them to exercise their right to freedom of religion. Trent-Towne became the community’s name in 1719, after one of its most prominent landowners, William Trent, who had acquired much of the surrounding territory from Stacy’s family. Later this name was shortened to Trenton.

In November 1790, Trenton was chosen as the new state capital, and on November 13, 1792, Trenton City was established in Trenton Township. George Washington’s first military triumph in the American Revolutionary War took place in this city. After crossing the cold Delaware River to Trenton, Washington and his army defeated the Hessian soldiers stationed there on December 26, 1776. After the war, in the months of November and December 1784, Trenton served as the temporary capital of the United States. United. Although the city was considered the nation’s future capital, southern states preferred a location south of the Mason-Dixon line.

The population and economy of Trenton

According to the same census, the employment rate in Trenton is 51.2%, with a poverty rate of 27.2%. The homeownership rate is 38.4%, the median gross rental cost is $1,085 per month, with a median household income of $37,002. According to Sperling’s BestPlaces, the unemployment rate in Trenton is 9.5%. The labor market in Trenton has grown by 1.3% over the past few years. Compared to the US average of 33.5%, future employment growth is expected to be 25.3% over the next ten years.

Although it has been used for many different purposes over the years, the place was restored to its original purpose, the home of William Trent, and opened as a historical museum in 1939. This house, which is truly steeped in history and continues to play a crucial role in New Jersey’s culture has been named a national monument by the US Congress.

One of the most important museums in the state and the location of an amazing array of art, history, and science exhibits is the New Jersey State Museum. The museum, located in the middle of Trenton, is a fantastic site to learn about the state’s history. The museum hosts several exhibitions, educational activities and events throughout the year.

One of Trenton’s most famous parks is Cadwalader Park. It has many leisure facilities including a playground, tennis courts and a walking path. The park offers beautiful views of the city and is located along the Delaware River. Several historic sites, including the Ellarslie Museum and the Civil War Memorial, can be found in Cadwalader Park.