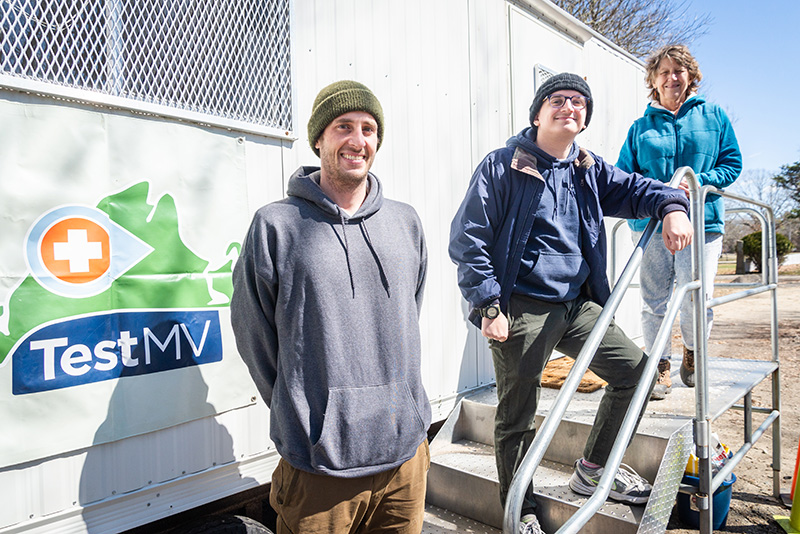 Inside the TestMV trailer parked on the grounds of the Agricultural Society is a photo montage of workers and volunteers wearing a series of masks. Faces are covered in blue surgical masks, N95 masks and large transparent visors that extend from the top of the head to below the chin.

“These were meant to help deaf people read our lips,” said Declan McBride, site manager for TestMV. “We’ve tried them all in the last year and a half.”

The test center opened on June 1, 2020, a few months after the outbreak of the pandemic. The idea was to create a drive-through testing center for islanders, free of charge, with no paperwork. Nothing like this had been done before on the island. First, the site was located at the regional high school; later it moved to West Tisbury School and finally to its present location on the grounds of the Agricultural Society.

“It’s been a wild ride,” said Mr. McBride, who has worked with TestMV from the start, progressing from site coordinator to site manager. “We ride through every wave, ups and downs, troughs and surges.”

“We had many iterations,” he continued, referring to the workers and volunteers who made TestMV possible. “Whenever we needed new people, we developed another team. The whole community came out. It was for the community, by the community.

The current field team is down to three: Mr. McBride, Evan Hartford, who started as the trial site coordinator this winter, and Donna McElroy, the lead clinical observer. Ms. McElroy has been part of TestMV since the beginning, as a volunteer.

“I’m a registered nurse and when they heard me speaking Portuguese to someone in line, they said wow and hired me,” she said. Ms. McElroy learned Portuguese when she was with the Peace Corps in Brazil.

Looking back on the trip, Ms McElroy said that at the height of the pandemic, when friends told her how depressed and isolated they felt, she comforted herself by coming to work every day, in a bid to protect her neighbors.

She recalled TestMV’s record pace just before Thanksgiving 2020. “We did 438 tests in one day,” she said. “Cars lined the length of Edgartown-Vineyard Haven Road. We had five tents at the same time.

But back when the pandemic was still in its early stages, when a vaccine was nowhere in sight and confusion and fear dominated the day, there was at first no nowhere to turn. Then a backyard conversation between a local businessman and a seasonal resident changed the island’s course.

“Steve Rusckowski, the CEO of Quest Diagnostics, was at his home in Edgartown and he started talking to Mike Donaroma,” recalls Ron Rappaport, an attorney on the island. “They called me and said, ‘We have to take tests here. How are we going to set it up? So we started by dividing it into categories. We needed a provider, and it became Island Health Care, we needed collaboration with the island health boards, and we needed money for the uninsured. Everyone signed immediately,” Mr Rappaport said.

“As far as Covid sickness goes, which we all know has been very bad, it was a moment of pure serendipity, a real silver lining,” he continued. “The Rusckowskis have given us a tremendous gift and all I can say is thank you to them and everyone who came together to help.”

“We needed $100,000 to make testing free for everyone,” Mr Rappaport said. “And I called James Anthony and he said right away, ‘you get it.'”

Mr. Anthony remembered the day he received the call from Mr. Rappaport.

The bank’s initial donation was just the beginning, as the bank and others began donating cash and in-kind support. Meanwhile, the bank was also processing nearly $50 million in payroll protection loans.

“It was a remarkable thing that you don’t see in very many places, all these different parties coming together and supporting each other,” Mr Anthony said. “I can’t tell you how happy, proud and humbled we were to participate.”

But money was only part of the equation. The logistics of starting up and operating a test site required the participation of many groups and individuals from across the island.

“The whole thing was an incredible partnership with Vineyard from the start,” said Cynthia Mitchell, CEO of Island Health Care. “The Rusckowskis and Ron and Michael Donaroma, Martha’s Vineyard Bank and the Boards of Health. And we were home for that.

“Covid relief funding came quickly and generously to federal health centers, so we had the funds and the capacity to set up testing centers,” she said.

She said coping with a pandemic was part of her organization’s mission statement – ​​no one expected to actually have to face this challenge.

“I guess we have to do it now too,” Ms. Mitchell remembers thinking, and she took the plunge. She has also given huge credit to the island’s health boards and the entire Vineyard community.

“We had 135 or more volunteers who came, no questions asked,” she said. “Nobody even asked for an allowance. And that allowed us to do the job – we kept the island safe.

“We are on track to receive an additional 8,100 rapid tests next week to add to what we have on hand, so there will be a good supply going forward,” she said.

Reflecting on the trip, Ms Mitchell called it an emotional moment. “It ranges from bittersweet to sad that such a great thing is coming to an end. On the other hand, it can’t go fast enough.

Those sentiments were echoed by Maura Valley, the Tisbury health worker who has acted as spokesperson for the island’s six health boards throughout.

“I understand that maybe in terms of need now is the time to shut it down but I feel a bit sad,” Ms Valley said. “And everyone who works there will be missed. I hope they know how much they have contributed to this effort.

She continued: “It was so important to keep our numbers down. People were panicking at first and there was no room for asymptomatic people to get tested. For visitors and businesses, knowing that TestMV was there was essential.

Ms Valley said the site would host group days, where dentists or hairdressers or hospitality workers could all come in for testing each week. “Or if one person at a construction site tested positive, we could bring in the rest of the workers.”

It was exactly those kinds of quick, targeted tests that Steve and Deb Rusckowski wanted to help achieve during that initial backyard conversation. Mr. Rusckowski had already set up a few drive-through test stations in other parts of the country, so he had some familiarity with how it was done on the island.

“But a parking lot in East Boston is very different from the Vineyard,” he said in a phone interview this week. “The whole dynamic had to be worked out – the supplies, the volunteers, the protection of the samples so they didn’t get overheated.”

At the height of the pandemic, Quest was handling about 150,000 tests a day nationwide, he said.

“We had 4,000 Quest automobiles and drivers across the country picking up and delivering specimens to our labs,” he said.

And that was only part of the logistical mountain to climb each day.

“If you think about the different steps it took even

once everything was set up,” he said. “First we had to collect the samples and ensure the safety of healthcare professionals during this operation. And even getting the swabs wasn’t that easy at first.

An immediate problem, he said, was that 60% of the world’s swabs are made in northern Italy. “As you may recall, one of the first outbreaks was in Italy and so they were closed and we had to find new suppliers.”

Once the specimens were collected, they had to be sent to the laboratory, which for the vineyard was located at the Quest factory in Marlborough. “A courier met the ferry at Woods Hole every day,” Mr Rusckowski said.

Then the samples had to be sorted and analyzed and returned to the patient. “We were working seven days, 24 hours, 365,” he said. “And we were all learning together.”

He continued: “It created awareness and helped manage the virus in its early stages. And it was rewarding and encouraging to see the collaboration and the cooperation, the teamwork that happened on the vineyard to bring it all together.

Mr Rusckowski said Quest was currently performing around 45,000 tests a day. “The virus will be present across the country and around the world for the foreseeable future,” he said. “And we’re still trying to figure out how to handle it.”

Returning to the TestMV trailer, Mr. McBride, Mr. Hartford and Ms. McElroy said they were preparing for their own next chapters after helping manage the virus for everyone on the vineyard for so long. First, they said, there was car travel. Mr. McBride plans to travel to Alabama first to reunite with friends he has known there from working at AmeriCorps. Mr. Hartford will travel to Canada to visit his girlfriend, then return to the island and his job at the Port of Oak Bluffs.

Ms McElroy said she would travel to Philadelphia and then to California.

“It’s like the Garth Brooks song, Learning to Live Again,” she said. “That’s what I’m going to focus on.”

McKenna’s Musings: Why the ECHL is Better Than You Think