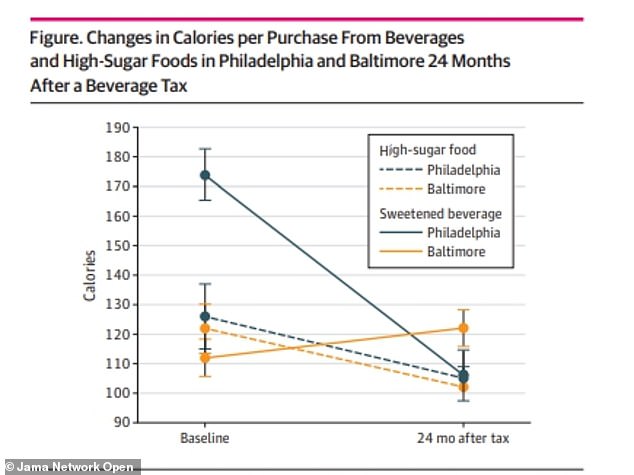 Taxing sugary drinks REDUCES demand: Volume of sodas and other beverages purchased in Philadelphia decreased by 42% compared to cities without tax

By Mansur Shaheen For Dailymail.Com

The Philadelphia tax on sugary drinks appears to have worked, as the volume of purchases plummeted two years after the tax was implemented, according to a new study.

In January 2017, the city imposed a 1.5 cent per ounce tax on sugary and artificially sweetened drinks such as soda.

Research by the University of Pennsylvania found that the volume of beverages purchased dropped nearly 42% in the 24 months after the tax went into effect.

While soda taxes are common in some other countries, their rollout in many cities across the United States has just started in recent years.

If successful, these types of taxes can help reduce obesity and health costs in the country, according to the team.

Baltimore was chosen as the control city because of its similar racial and economic demographics, while being a city close enough geographically to compare, but far enough away that travel between cities was not a common occurrence.

In the United States, soda consumption among high school students fell by more than a third between 2007 and 2015.

Meanwhile, there has been an increase in the number of American children drinking diet sodas.

Researchers say the new figures are encouraging, as sugary drinks are one of the biggest contributors of added sugars to adolescent diets.

However, they noted that the overall prevalence of Americans drinking sugary drinks, at all ages, remains high and that more approaches need to be put in place for the downward trend to continue.

The report, as part of the CDC’s Weekly Morbidity and Mortality Report, drew its data from YRBS – a U.S. survey that provides representative data on health behaviors among students in grades 9 to 12.

The survey asked high school students how many times they had drunk “a can, bottle or glass of soda or soft drink, such as Coca-Cola, Pepsi or Sprite” and not counting diet drinks.

The researchers found that the number of college students drinking soda every day had dropped significantly, from 33.8% in 2007 to 20.4% in 2015.

The researchers needed some distance between cities, as a common criticism of soda taxes is that residents can simply cross city lines to avoid the tax.

They analyzed 58 small independent stores in Philadelphia and 63 in Baltimore.

A total of 1,904 people in Philadelphia and 2,834 people in Baltimore participated in the study.

A member of the research team stood outside these stores three times a day for two months, asking anyone who appeared over the age of 13 if they had purchased a food or drink.

The number of ounces per sugary drink purchased in Philadelphia was 41.9% lower than it was in Baltimore – about 6.12 fluid ounces less purchased.

It also resulted in a 69% drop in the number of calories purchased from foods and drinks high in sugar in the City of Brotherly Love.

The researchers found that one of the main reasons for the drop in numbers was the increase in the price per ounce of sugary drinks.

Residents of low-income neighborhoods in Philadelphia were also 43% less likely to purchase sugary drinks than those in Baltimore.

There was also a 41.4% drop in purchases by people with less education.

The researchers are confident in their findings and say they believe the results show that there may be a long-term decrease in soda consumption in cities that implement these types of taxes.

Other studies analyzing other cities have also found similar results.

America’s first soda tax was instituted in Berkley, California, and resulted in a 10% drop in sales of sugary drinks.

Meanwhile, a 2019 study found that these types of taxes could reduce the country’s obese population by 630,000 and even save the country $ 1.8 billion in health care costs.

Taxes also help generate revenue to fund certain programs, such as in Philadelphia where the funds are used for education initiatives.

Soda consumption in the United States is gradually declining, with 2018 marking the 13th consecutive year of decline, according to Statistical.

In 2018, the average American consumed just under 39 gallons of soda.

Major cities like Seattle, Washington DC, Oakland, and San Francisco are also among the cities that have instituted a soda tax in recent years.