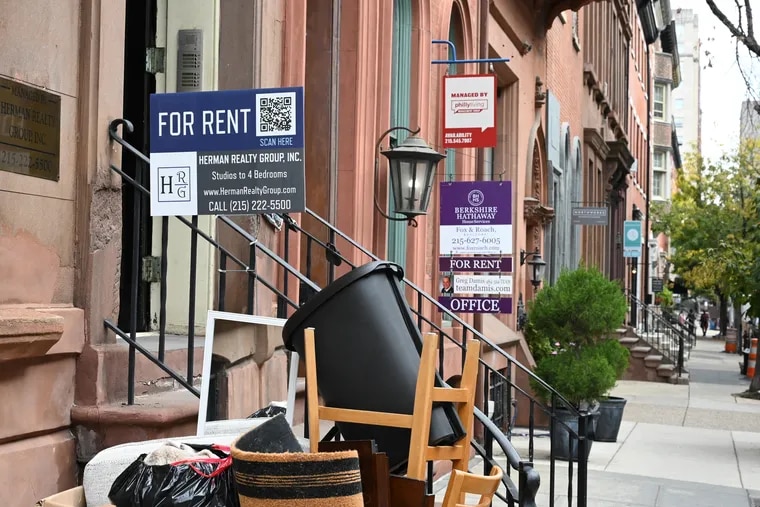 Philly relies too much on tenant complaints to keep rentals safe, says Pew

Rentals represent a growing share of Philadelphia’s housing stock, and while the city is responsible for making sure rentals are safe and livable, it only inspects about 7% of rental homes each year, according to a report from the Pew Charitable Trusts.

â€œIt certainly surprised us that it’s this low,â€ said Octavia Howell, author of the report and head of the Philadelphia Research and Policy Initiative at Pew Charitable Trusts.

The lack of inspections means an unknown number of tenants in Philadelphia could be living in homes that put their health and safety at risk.

Despite the city’s historic reputation as a homeowner’s town, nearly half of Philadelphia’s households – around 300,000 – rent their homes, according to Pew’s estimates. The city’s licensing and inspection department relies primarily on complaints from residents to trigger inspections, a reality of limited resources and a wide range of departmental responsibilities, according to L&I.

The pandemic has helped more people realize that the quality of housing can affect the health and well-being of the household. The Pew report released Thursday analyzed the Philadelphia approach to rental code enforcement. It aims to encourage the city’s policymakers to consider different options to ensure that Philadelphians, especially those who earn low incomes and have little choice about where to live, reside in safe homes, Howell said.

Some policymakers fear that crackdowns on the enforcement of rental housing standards could weigh on landlords who struggled during the pandemic, leading to higher rents and the displacement of tenants. They “see a trade-off between making rental properties safer and maintaining affordability for the city’s large, low-income population,” Howell said.

â€œWe recognize these concerns and tenant advocates do too,â€ she said, â€œbut they say failure to enforce basic rental housing standards for all perpetuates a dual housing market. inequitable with one set of standards for low-income households and one for all others. . “

Pew examined rental code enforcement in nine other cities that, like Philadelphia, have a large stock of rental housing with a high percentage of units built before 1980 and / or located in single-family or duplex homes. He found that enforcement varies widely, but that Philadelphia and others are exploring new ways to ensure owners meet rental standards.

Some cities, like Baltimore, aim to inspect properties as they are registered as rentals and periodically thereafter, according to Pew. New York and Chicago join Philadelphia based on complaints from residents, but tenants may be reluctant to complain for fear of retaliation from landlords, which is illegal.

Howell suggested that Philadelphia officials consider conducting periodic inspections of all rental units rather than waiting for complaints. But in 2017, L&I told city council it would have to spend $ 3.4 million per year to employ 52 additional people to inspect each rental unit every five years. The department is already struggling to recruit.

“We are down to less than 45 code enforcement inspectors who have a very wide range of responsibilities,” said L&I spokeswoman Karen Guss. â€œBoth responsibilities that make sense as fundamental building safety responsibilities, but also other tasks that they are supposed to do. “

The nation’s capital trains city residents as contract workers to inspect properties. L&I has not considered taking that step, which could be particularly difficult in Philadelphia, Guss said, as four out of five rental properties are single-family buildings and residents should allow amateur inspectors to enter.

Philadelphia could also inspect all of a landlord’s rental units if any of them have significant violations, as Portland, Oregon does, Howell said. L&I has done this from time to time, according to Guss.

L&I is primarily responsible for enforcing the property maintenance, safety and zoning standards that owners must meet. But because the department does not have enough code enforcement officers to do this and other work, the city relies on owners to keep their properties up to code. The owners themselves certify that their homes are safe and livable.

Some cities carry out repairs for homeowners who do not follow safety rules. The Philadelphia City Council passed a law last month that would require the city to pay to correct security risks and bill the landlord. The city also offers loans to homeowners who cannot afford repairs.

Pew has found, in interviews with landlords, that whether or not their homes are maintained depends on the amount of rent they receive, the likelihood and severity of consequences for non-compliance, and the demand of the owner. market for housing even in poor condition, due to low income of tenants and previous evictions. , which limit the choices.

When code violations come to light, Howell said, “it can take a very long time for a homeowner to have a financial consequence.” Code violations reported to the city’s legal department may not be brought to court for six months or more. L&I expands the use of portable electronic devices to document violations and notices of site violation, allowing landowners to settle cases faster for a fixed fine without having to go to court.

Rental housing throughout the city that is not licensed and where landlords operate under the radar further hamper proactive rental code enforcement. Much of the city’s single-family rentals resemble owner-occupied homes. Single-family or two-family rental homes in distressed neighborhoods are the least likely to be permitted. They are also more likely to be rented by low-income households.

New gene therapy for hemophilia has led to

It’s time to make a change