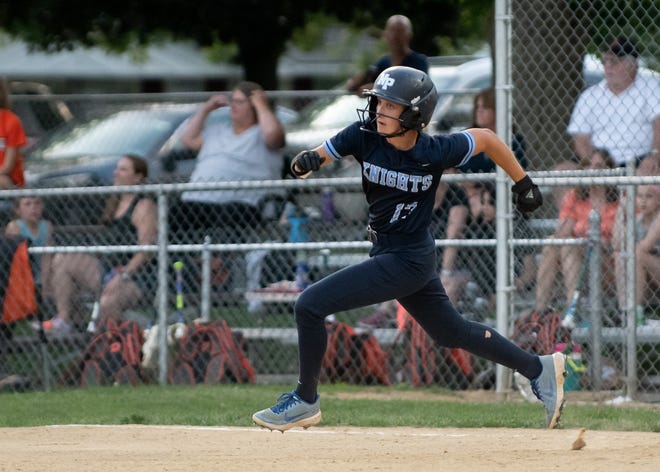 Shearer was good as gold, but the Knights edged Spring-Ford

It was a heartbreaking ending.

Julia Shearer’s flowing line off the bat with a North Penn runner at second and two out at seventh had a hit written all over it, but Allie Westcott had other ideas. The Spring-Ford senior went for an all-or-nothing dive and found the ball in her glove for Monday’s PIAA 6A Semifinal final at Boyertown High School.

“Any other left fielder, any other team, would have gone down, and something crazy would have happened,” Shearer said. “It’s just a pity. She made a good catch. »

The Rams — thanks at least in part to Westcott’s heroics — will travel to Friday’s PIAA 6A state title game at Penn State University. The district champion Knights, the highest-ranked team in the state, are heading home.

“We have an amazing group of seniors – it’s going to be sad to let them go,” Shearer said. “But I feel like we came out and fought as hard as we could. We had energy. We just couldn’t produce, and that hurt us today.

Monday’s state semifinal was a rematch of the District One 6A semifinal, a 5-2 win by the Knights in a contest that saw the Rams commit four errors. This time around, they played flawless defense behind pitcher Jules Scogna and not only nailed every routine play, but every tough play as well.

“I think we relied on the fact that we beat them before, and we shouldn’t have done that,” senior co-captain Sophia Collins said. “It’s definitely hard to start over once you’ve beaten a team.

“We had riders in third position in several heats. Just no clutch kicks.

For the first time this season, the Knights were kept off the scoreboard. They had plenty of chances, especially in the first inning when Sarah Sabocsik hit a one-out double on the fence and Annabelle Smink followed with an infield single. Smink took second place on defensive indifference, and the Knights had a pair of runners in one-out scoring position. Scogna retired all four and five batters for the Knights for two of his four strikeouts in the game. It turned out to be a harbinger of things to come.

“It was huge because we knew if we jumped on them in the first inning we were in control of the game and we didn’t,” said Knights coach Rick Torresani, whose team held a 8-3 advantage on hits. We had a lot of people on base, and we just couldn’t get the clutch going.

The Rams put a pair of unearned runs on the board in the fourth despite just one hit as they capitalized on a rare error by North Penn. That 2-0 lead held the rest of the way.

Shearer – who allowed just three hits, struck out eight and walked one – allowed just six earned runs in 159 innings in a stellar season that saw the player of the year from Gatorade compile a 25-2 record.

Attribute Pennsbury’s loss in Monday’s PIAA Class 6A softball semifinal to a couple of things.

And a little anticipation.

“I think maybe we got a bit ahead of ourselves and thought we were playing for the state title,” Pennsbury wide receiver Rowan Mulholland said of the 9- 0 for his team against Seneca Valley.

“And their pitcher did a really good job. If you can’t hit, you can’t win.”

The loss, the first time the Falcons (24-3) have been shut out all season, ended their season as the Raiders advanced to Friday’s PIAA title game against Monday’s game winner night between defending PIAA champion North Penn and Spring-Ford.

“Give this team a lot of credit,” said Pennsbury head coach Frank McSherry, who concluded his 40th season with a second straight trip to the PIAA semi-finals and plans to return in 2023.

“They came out aggressive with the sticks and were ready to go. We made some unusual mistakes which hurt us and we were never able to get into our game. They deserved this one.”

Seneca Valley (16-6), which is about 25 miles north of Pittsburgh, heads to State College as the district seven champion and winner of 13 straight games.

“We played really well and we have to keep doing it for one more game,” said Seneca Valley freshman head coach Marlesse Hames, who was the top senior pitcher in 1992 when the Raiders made their only appearance in the PIAA title match. .

“This whole season has been really cool. Our girls are all friends and they have fun on the pitch. We lost when we played in the United States when I was a senior and hopefully it will be another story for us this time.”

This year’s story has a familiar theme from 30 years ago as Hames’ daughter, impressive rookie Lexie Hames, is a dominant pitcher.

Younger Hames allowed Pennsbury just one hit and didn’t walk a batter while striking out 11. Neither Falcon passed second base.

In last Thursday’s quarterfinals, Hames gave up just three hits in a 1-0 win over Quakertown.

“Their pitcher is really tough and she throws punches,” McSherry said. “They’re a tough team to face.”

“Ainsley meant so much to our program, like all seniors,” McSherry said. “We have some very good players coming back, but we will miss our seniors.”

And they can sing too…

In a cool pregame moment with both teams lined up after introductions, a recalcitrant PA system wouldn’t play the national anthem. Carefree. Instead, the Pennsbury players started chanting the Star Spangled Banner and the Seneca Valley players quickly stepped in. Well done on both sides.

They’ve already made history, and they’re far from over

Pictures:Pennsbury and Quakertown look to keep their post-season dreams alive in the quarter-finals

It was a historic season for Conwell-Egan, long before the Eagles played in the PIAA Class 2A Semifinal on Monday. And the Eagles will go on to make history, after beating Claysburg-Kimmel 7-2 to advance to their first state title game in program history. And it’s not just a first for Conwell-Egan, but for the Catholic League of Philadelphia. The Eagles will become the first team in PCL history to play in a PIAA Softball Championship game.

The Eagles were just the second PCL softball team to win a state quarterfinal in league history, eight seasons after Lansdale Catholic made it to the semifinals in 2014.

Game-winning pitcher Ahlana Sesar limited the Tigers to just four hits, while the Eagles offense took care of the rest.

Philadelphia Catholic League MVP outfielder Katey Brennan continued her strong play in the playoffs. Brennan, who landed a saving dive in the Eagles’ first-round win, led the way on offense with a pair of doubles. Cassidy Blaskof, Ange Bresnan and Cecilia McBeth had two hits apiece for the Eagles, who opened the game with a five-run fifth inning.

An unusual first set saw Tunkhannock score seven runs over the Jems, who were unable to come back in the Class 4A semi-final game. While throwing was a strong point for the Jems in their playoff run, Tunkhannock took advantage of a few errors and a wild throw to put the game out of reach. Villa Joseph Marie finished the season with a 19-4 record and a Class 4A District One Championship.