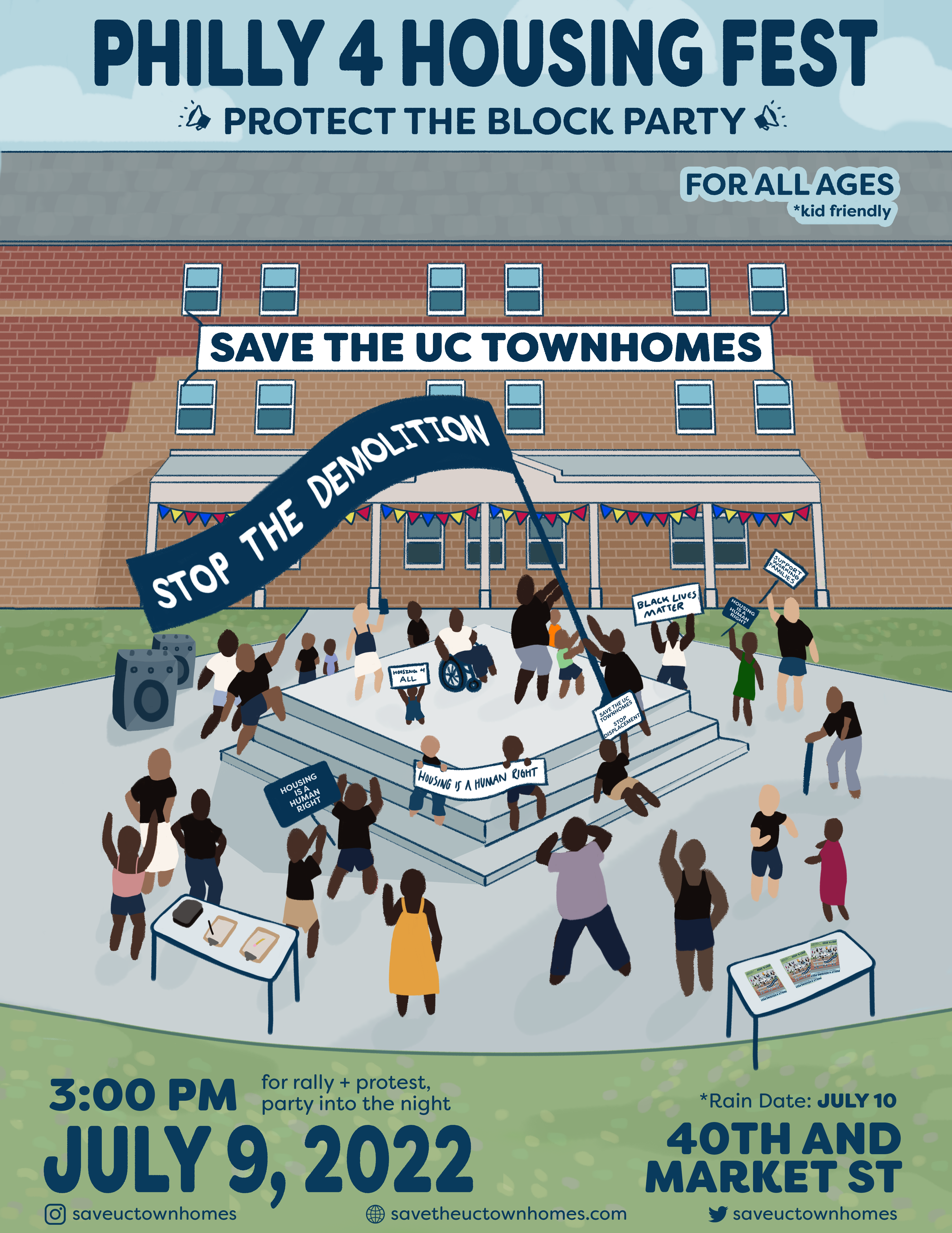 Are you homeless, paying too much for your rent, living in unsanitary or unsuitable housing, threatened with eviction? Do you think housing is a human right?

The Save UC Townhomes Coalition asks you to join – in person or by sending statements of support – others concerned about housing insecurity at a “Philly 4 Housing Fest – Protect the Block Party” on 9 July, starting at 3 p.m. at 40th and Market Streets.

Excessive rents and housing scarcity are impacting millions of working-class and low-income residents across the United States. In Philadelphia, the struggle to save college townhouses from demolition by gentrifiers and developers is at the forefront of this battle.

Housing is a human right

One in four Philadelphians lives in extreme poverty. There is no citywide plan to preserve low-income housing or build new affordable housing for city residents.

Worse still, 1,700 low-income housing units at 37 sites, in addition to townhouses in University Town, currently have contracts with housing and urban development expiring within the next five years. Housing activists worry that many owners of these properties are selling to gentrifiers rather than renewing their HUD contracts.

The pressure to sell is high as rising mortgage rates, inflation and other negative economic developments have real estate investors fearing an impending crash in the housing industry.

For the working class and especially for oppressed Black, Latino and Indigenous communities, the housing crisis has been around for a long time. The United States faces a shortage of 6.8 million affordable and available rental units for ultra-low-income renters whose household income is at or below 30% of their region’s median income, according to an analysis by the National Low-Income Housing Coalition.

Problems caused by the high cost of housing are so widespread that three quarters of American residents now believe that adequate housing is a human right. Two-thirds believe government programs need to be expanded to ensure this right, according to a 2018 poll released by the National Law Center on Homelessness and Poverty.

University City Townhomes, at 3900-3999 Market St., have provided low-income housing to 70 families since 1983. Notoriously racist Mayor Frank Rizzo – after he was convicted of housing discrimination by federal courts in the early 1980s – sold the property of the city land where the townhouses are located for $1 to IBID Associates, a subsidiary of the Altman Group.

Current owner Brett Altman wants to make a killing in the tight housing market. He therefore chose not to renew the low-income housing agreement with HUD, unaware of how disruptive this decision will be in the lives of black resident families, many of whom have children and/or people with disabilities.

In October 2021, Altman announced plans to evict the families, tear down the townhouses, and sell the land to developers and gentrifiers for up to $100 million.

Bourgeois developers of luxury skyscrapers for college students and nearby science research complexes want to evict UC Townhome families, whose children would be forced out of their schools and safe play spaces. Parents, elders and residents with disabilities would lose proximity to hospitals and public transportation. The Townhomes is one of the few remaining black communities in a Philadelphia neighborhood once known as Black Bottom.

A resident who has lived in the Townhomes since 2009, who prefers not to be named, explained why residents are so strongly resisting their evictions: “This complex is probably one of the few examples of a low-income community complex. which facilitates the play, interaction and growth of children in relative safety.

“Its location serves to facilitate access by otherwise less empowered residents to a range of goods and services that are not as readily available to those in comparable economic circumstances.

“If empowerment, self-actualization and building communities among the less empowered are meant to emancipate us, then removing ourselves from this complex is a step in the wrong direction.”

The Save UC Townhomes Coalition, made up of residents and supporters who hold weekly organizing meetings, has responded to the threat of gentrification with frequent rallies and marches. They showed up in large numbers to protest nearby University of Pennsylvania offices and events, at Altman and other real estate offices and even at HUD headquarters in Washington, DC.

A residents’ council has filed amicus briefs with the attorneys, which must be read by court officials, Altman and the city of Philadelphia. Residents and supporters have written numerous articles and appeared on radio, television and social media and spoken at numerous public events.

As a result of these many actions, residents asked Altman to make repairs and improve maintenance — and most importantly, to extend his HUD contract for two months, until September 8.

But most residents rely on Section 8 housing vouchers, the federal government’s inadequate program to help very low-income families, seniors and people with disabilities afford decent, safe and healthy housing on the private market.

Two months is not enough time to find replacement housing that will accept Section 8 vouchers, especially in the midst of the COVID-19 pandemic and with the extreme shortage of low-income housing in the city. Many residents are disabled or have other barriers to finding housing, including pets or bad credit.

Save the UC townhouses!

The demonstration on July 9 will be the start of a new campaign by residents to defend their homes. Their demands are clear: Stop the demolition of public housing at UC Townhomes and everywhere else in Philadelphia. No evictions or demolitions should take place until each family has found suitable housing. If people are forced to move, the site should be preserved as affordable housing.

Altman and other developers shouldn’t get away with making millions of dollars displacing low-income black families. In fact, Altman owes the residents compensation if they are relocated, especially since he is expected to earn more than $100 million from the sale.

The Save UC Townhomes Coalition insists it won’t stop its fight until it wins. They know that housing is a human right – won only if they fight for it.