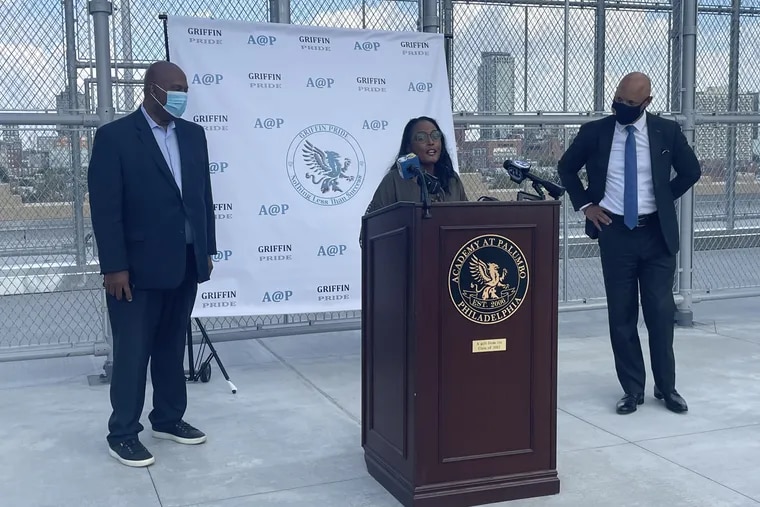 Many schools in Philly are collapsing. Help must come from Washington, say leaders.

Many schools in Philadelphia are in dire need of repairs, and local funds alone cannot afford the billions of dollars needed to bring buildings up to 21st century standards. Help is to come from Washington, DC, officials said on Friday.

â€œWe need to do something about these facilities,â€ said US Representative Dwight Evans (D., Phila.), Standing on the roof of the Academy in Palumbo, a magnetic school in south Philadelphia.

Estimates put Philadelphia’s capital needs at nearly $ 5 billion, and although the district has managed to invest significant dollars in buildings in recent years – including the nearly $ 400 million for investment projects that the school board authorized to borrow on Thursday – these needs far exceed their availability. Resources.

Evans and Superintendent William R. Hite Jr. met at a press conference on Friday to tout a federal tax credit as the congressman is pushing to be included in the federal government bill. $ 7 trillion infrastructure currently being debated in Washington. Evans wants districts in the United States to be able to use the tax credit to repair historic buildings like Palumbo, who is 91 years old.

After years of leaks and other problems, Palumbo’s roof and many classrooms were flooded and one ceiling partially collapsed in 2018. Three years later, the school finally has a new roof, with breathtaking views, basketball hoops and picnic tables.

Across the city, other schools are struggling with needed repairs. At U School, a small district high school in North Philadelphia, a classroom ceiling collapsed Thursday after years of leaking and chipping plaster, a staff member said.

It’s a challenge not unique to Philadelphia, said the superintendent.

â€œThese students deserve to be in great facilities where we can focus on their learning instead of focusing on crumbling walls,â€ said Kiana Thompson, director of Palumbo.

Thompson is thrilled with the new roof, she said, and she loves the character of the building at 11th and Catherine, but it still needs some work, mostly painting and plastering.

If Evans’ proposal is accepted, work on buildings like Palumbo, built in 1930, would be eligible for federal money.

It’s not clear whether the schools provision in the infrastructure bill will pass, but Evans said it was important to keep up the pressure.

â€œI want to make sure the schools are on the table,â€ Evans said, adding that he believed the district was doing its best to cope with the huge facility needs with the resources it has.

Critics in the district, including the Philadelphia Teachers’ Federation, acknowledge the district’s limited resources and current lack of federal support, but say the school system is mismanaging facility issues.

Jerry Jordan, president of PFT, said in a statement he supported federal infrastructure legislation but the district had allowed systems “to deteriorate, leaving students and staff in peril day after day.”

Jordan said he found “unacceptable, and indeed unconstitutional that we fail our students in such a profound way every day. And let me be very clear: these are conditions that would never, ever be tolerated. in richer and whiter school districts. â€

Freda Anderson said she has been sounding the alarm bells on the conditions inside her classroom on the third floor of U School for the past six years. There is frequent water damage which causes plaster bubbles and fine dust which bothers asthmatics. Crews come out from time to time to repair the plaster, but not the underlying condition.

Anderson and school staff have warned officials the issue looks serious this school year, but nothing has been done. Anderson was absent and her students out of the classroom on Thursday when the collapse apparently occurred. No one noticed until Anderson returned to class on Friday.

Without a stroke of luck, the room would have been occupied on Thursday.

â€œClassrooms are overcrowded, we are understaffed and the children are sitting on top of each other. There would have been no way for me to stay clear of the firing line of the leak or the collapse, â€said Anderson, who lectured in the adviser’s office on Friday.

According to data submitted to the teachers’ union, Anderson’s class is not alone. At U School, located inside the old Ferguson Elementary School on N. 7th Street, several classrooms have issues ranging from water damage and active leaks to rodent issues and peeling paint. .

In some cases, the issues were reported years ago – and labeled â€œurgentâ€ by the PFT, meaning they requested a response from the district within days – and still have not been resolved.

The district said it was unaware of the ceiling collapse in Anderson’s classroom. Anderson said she filed documents on Friday, but due to understaffing there was no one to notify central office of the problem.

Monica Lewis, spokesperson for the school system, said district records showed “no unresolved issues” at School U, but now that officials were aware of the ceiling collapse, staff were ‘would endeavor to resolve it “in due course”.

” As soon as we receive [notification of facilities issues], we are looking at them to see how we can best deal with them, â€Lewis said.