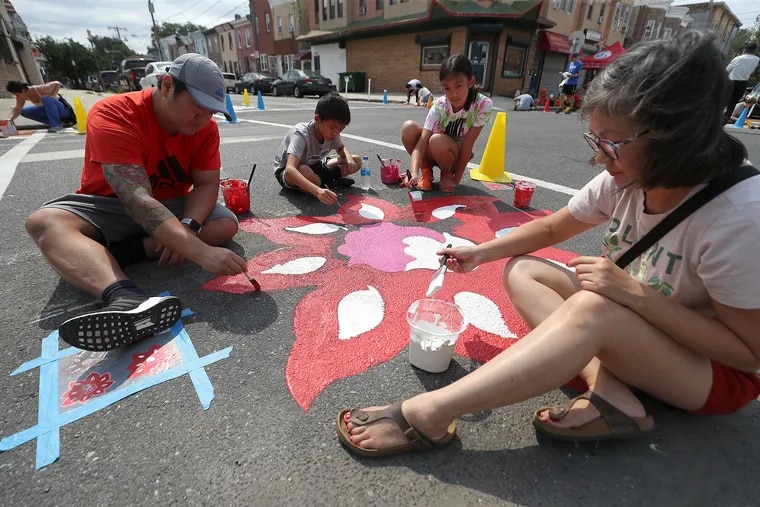 In the heart of the Southeast Asian community of South Philly, painting a street mural to improve pedestrian safety and “create a sense of hope”

On a summer morning breeze, community members crouched down at the four corners of the Seventh and Wolf intersection to paint a mural that organizers say will improve pedestrian safety, help attract business to the city. hallway stores and, as Somaly Osteen puts it, “creating a sense of hope”.

Osteen, a Cambodian immigrant who manages the South Philly trade corridor along Seventh Street for the Southeast Asian Mutual Assistance Association Coalition (SEAMAAC), said that after a difficult year for the largely immigrant neighborhood and its businesses, the mural is being created to send the message: “Even if there are challenges, there are still good things.

The mural project was imagined by Osteen in 2019. That year, the 32-year-old won a $ 5,000 grant from the Knight Foundation “Champions of the Emerging City” to install the mural after organizing a series of meetings with residents and business owners to get their input. They chose a mix of fabric and flower designs that evoke the region’s diverse community. Of the more than 60 companies on the hallway from Mifflin to Porter Streets, half are owned by Cambodians, while others are owned by entrepreneurs from countries such as Vietnam, the Dominican Republic, China, Honduras and Myanmar, Osteen said.

One of those traders was one of two dozen who came to paint on Sunday morning: Nor Farida, who just opened a grocery store down the street in Seventh and Durfor at the end of April. His store – Nor Halal Meats and Groceries – sells foods and snacks from his native Myanmar, as well as other Asian countries, including fruit jellies from Myanmar, Super Onion crackers from Indonesia, and a boxed mix for making martabak, a Southeast Asian bread that can be salty or sweet.

“I had a wish to start a business,” said Farida, who came to Philadelphia as a refugee in 2015. Osteen and SEAMAAC helped her get permits and forgivable loans to open the store, and So she gave back to SEAMAAC, she said, as she painted a bright purple flower on the corner of the block. Later, she cut up a fruit plate for the volunteers.

READ MORE: He painted murals in Beijing. Now he dreams of painting Chinatown.

The mural is part of a larger beautification and safety effort led by SEAMAAC for the neighborhood. The organization recently installed lights across the Seventh and Wolf intersection and is working with Mural Arts and artist Shira Walinsky on a mural in Eighth and Wolf that SEAMAAC member Andrew Niemynski described as a “community map. abstract “. Osteen says she hopes to get more funding so she can install more street murals at other intersections to help give residents and business owners a sense of ownership over the neighborhood, even as they struggle. against violence and drug trafficking in the region.

The mural aims to make the intersection safer by drawing the attention of drivers, who will slow down and then stop, instead of crossing stop signs. Most of all, it is hoped that this will make the walk safer for families taking their children to the nearby Francis Scott Key School, Osteen said.

“That Philly slide!” said Henry Ross, a 34-year-old man who has lived in the neighborhood his entire life. “They have to take that slide off Philly.”

Murals designed to slow traffic and increase pedestrian safety have been installed in towns such as St. Paul, Minn .; Baltimore; and Philadelphia – the South of South Street Neighbors Association collaborated with Mural Arts to install one at the university hospital this year. Philadelphia had a higher traffic fatality rate than New York, Chicago and San Francisco, according to 2018 data from the National Highway Traffic Safety Administration.

READ MORE: In South Philly, a garden where immigrants grow food that tastes like home

Neighborhoods that are largely home to people of color and people living in poverty are more likely to experience such accidents, according to the City of Philadelphia’s Vision Zero 2025 action plan, which aims to reduce the number of people to zero. road deaths by 2030.

The mural was originally designed by Harrison Doyle and updated by Chenlin Cai, a Chinese immigrant who previously partnered with the Philadelphia Chinatown Development Corporation to paint a mural on Vine Street Plaza in Chinatown. Installation was delayed for a year due to the pandemic.