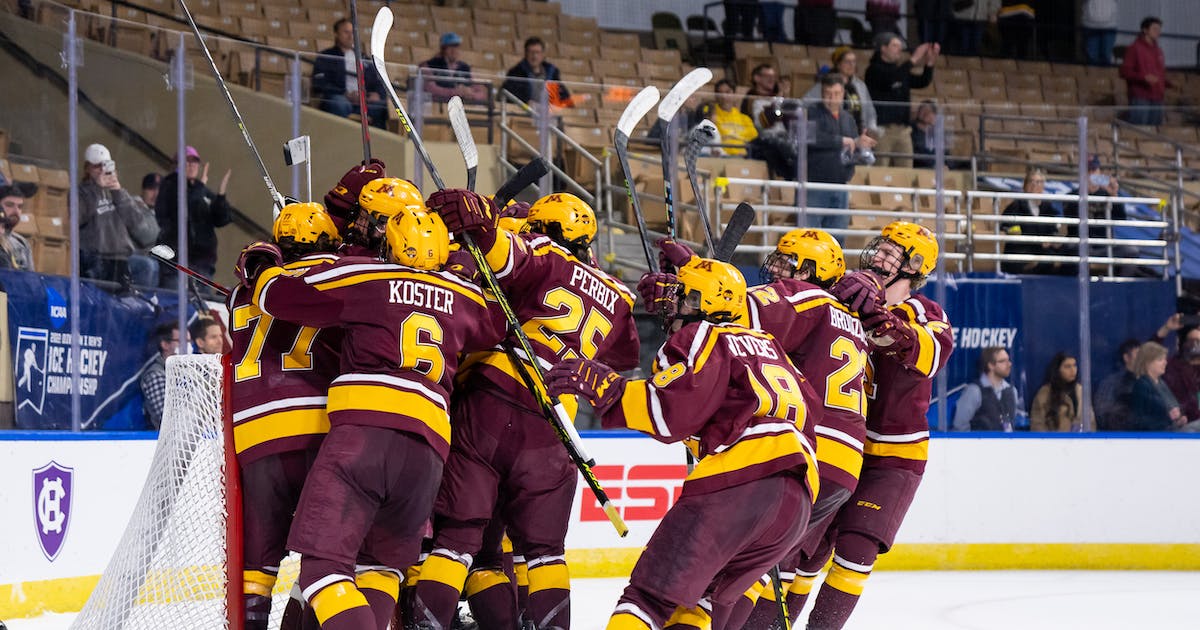 As Gophers men’s hockey coach Bob Motzko and assistant Garrett Raboin walked into the locker room at the DCU Center on Sunday, they were serenaded with an offbeat version of “Happy Birthday” from a collection of players who a few minutes earlier had delivered them quite a gift:

The Gophers’ first trip to the NCAA’s Frozen Four since 2014.

Behind goals from Matthew Knies, Aaron Huglen and Blake McLaughlin and a 24-save shutout from goaltender Justen Close, the second-seeded Gophers beat top-seeded Western Michigan 3-0 in the Worcester Regional Final (Massachusetts) on the occasion of Motzko’s 61st birthday and Raboin’s 37th.

“It’s the perfect birthday present,” Gophers forward Blake McLaughlin said. “Going to Boston, I don’t know if you could ask for much more.”

The Gophers (26-12) will face Minnesota State Mankato in the Frozen Four semifinals at 7:30 p.m. (Central) on April 7 in Boston. Denver will face Michigan in the other semifinal at 4 p.m. The national championship game is at 7 p.m. on April 9, and a team from Minnesota is guaranteed to play there.

“We’re not done yet,” Gophers defenseman Brock Faber, who led an outstanding defensive effort with five blocked shots and an assist, said in a postgame ESPN interview.

Ben Meyers had two assists as the Gophers reached the national semifinals for the 22nd time. Their last Frozen Four appearance was in 2014 in Philadelphia, when they beat North Dakota on Justin Holl’s goal with 0.6 seconds left in the third period before losing 7-4 to Union in the title game.

The Gophers will also be looking to end a 19-year national championship drought. Motzko was an assistant for Minnesota when the team won back-to-back titles in 2002 and 2003.

“It was a really good weekend for our team,” Motzko said. “We played as close together in two games as you need and want to do. I couldn’t be more proud of our group.”

Courage and persistence were themes for the Gophers this weekend, and they continued their rally after a pair of two-goal deficits to beat defending national champion Massachusetts 4-3 in overtime in the first round ruling out the western Michigan. The Broncos were averaging 3.63 goals per game, fourth in the nation.

Knies, named tournament MVP, started the scoring in the first period minutes after limping off the ice after blocking a right-footed shot. At 10:11, Faber came down the left wing boards, skated under the goal line and sent a backhand pass to Knies. The freshman, parked in front of the net, beat the puck on goaltender Brandon Bussi for a 1-0 Gophers lead.

“He’s a great player,” Motzko said of Knies, “and he’s going to keep improving too.”

The Gophers dominated territorially in the first period, not allowing a shot on goal for 12:23 and outscoring the Broncos 9-4.

“They really made it difficult for us to create anything clean offensively,” Broncos coach Pat Ferschweiler said. “It’s a credit to them and how hard they compete.”

Western Michigan (26-12-1) released a lot more energy in the second period and appeared to tie it 1-1 at 11:16 on defenseman Ronnie Attard’s goal. A video offside call, however, wiped out the goal, showing Broncos forward Max Sasson entering the area before the puck crossed the blue line.

Just 10 seconds into the third period, Western Michigan forward Ethen Frank hit Faber, and the Gophers charged the Broncos on the power play. Twenty-three seconds later, Meyers sent a cross pass to Huglen, who sent the puck into the open net for a 2-0 lead before Bussi could slide.

Western Michigan got a power play with 3:32 left in the third when defenseman Matt Staudacher was whistled for hanging. Ferschweiler drew Bussi for an extra forward with 2:25 left, but McLaughlin intercepted a pass and pushed a slow puck into the empty net with 1:57 remaining for a 3-0 lead.

McLaughlin’s shorthanded dagger kicked off the celebration for the Gophers, who impressed their coach with the way they handled playoff hockey.

“Our courage and our determination – to block shots and come back in defence. … Look at the scores from yesterday: 1-0 and 2-1,” Motzko said. “You have to work your way up, and you’re not going to do it being cute all the time. Our program thrives on that, that’s for sure.”

Joining Knies on the all-tournament team were Western Michigan’s Meyers and Luke Grainger up front, the Gophers’ Jackson LaCombe and Attard on defense and Close in goal.

The Star Tribune did not travel for this event. This article was compiled from the television broadcast and video interviews before and/or after the event.

Philadelphia Eagles interest in Kenny Pickett might just be something