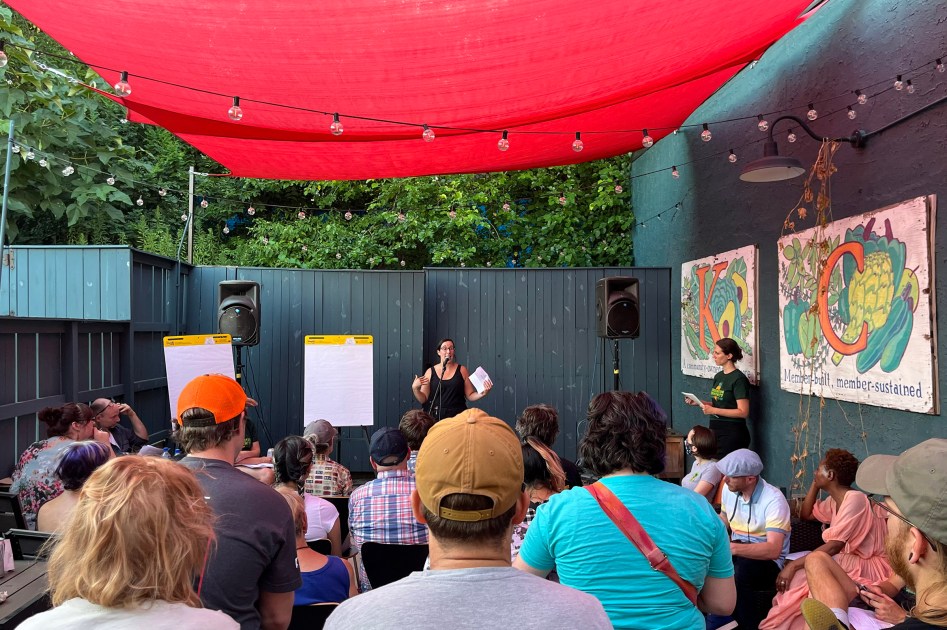 A lifeline has appeared to keep the Kensington Community Food Co-op afloat, but the member-owned grocery store is still looking for permanent leadership. Meanwhile, as plans for an apartment complex take shape next door, some have suggested shutting down the co-op’s free community fridge.

The market, located in a neighborhood with lower median incomes than many other Philadelphia food co-ops, opened in 2019 after a decade of construction. It is struggling to bounce back from a pandemic crisis.

This week, days after an emergency meeting in which the board pleaded for members to “deepen their capital” by canceling loans and making new donations to avert an impending shutdown, KCFC announced a major injection of funds: a loan of $100,000 from the National Co+ op Cooperative for the development of grocers.

“This influx of capital is huge for us, and at the same time the fundraising and fundraising work continues,” co-op president Nadia Schafer told Billy Penn.

💌 Do you like Philly? Sign up for Billy Penn’s free newsletter to get everything you need to know about Philadelphia, every day.

The new loan doesn’t end fundraising — the co-op needs $233,000 to pay off its debt and make needed improvements — but it will at least allow the store to start restocking its shelves as it searches for a new manager. Whoever takes over the management of the neighborhood grocery store will have to oversee major changes. The co-op is giving up part of its property at 2670 Coral St. as part of an agreement with the owner, who plans to build apartments in the current parking lot.

At the KCFC’s emergency meeting last Thursday, members were divided over plans for new housing. The market would lose easily accessible parking for customers, some noted. Others noted that the store could gain a lot of new customers once the residents move in.

If the cooperative can survive that long. Leadership in April believed the market had six months to live.

With major accounts payable backlogs and several thousand dollars short of last month’s payroll, KCFC’s volunteer board is asking members to increase their investment in the co-op, work at the store for free and d cancel the loans they have already made. Membership requires a $300 investment in the co-op, and the board asks people to increase their contribution, up to a maximum of $1,500.

For some — like two board members who pledged to donate $1,000 on the spot at last week’s meeting — it’s a no-brainer. Others, KCFC executives have acknowledged, are reluctant to inject cash into a business with an uncertain future.

Some have blamed the co-op’s environment, saying the store’s success is influenced by people nearby who are homeless and drug addicted. Several members said that the community fridge needs to be shut down because it attracts the wrong kind of people to the building. Others agreed, noting that co-op prices are not accessible to many in Kensington.

“I don’t think we’re a charity,” one member said at the meeting. “I would much rather see some perimeter policing so that we have a clean, nice place to shop.”

Two staff members spoke on behalf of neighbors who regularly rely on the fridge to eat. “It shows the potential at the heart of the co-op,” staff member Rashel Rivera told Billy Penn after the meeting. The contents of the refrigerator are donated and cost nothing to the cooperative.

A former board member made a personal appeal.

“I use it,” the former board member said, adding that the fridge is part of what makes the co-op inclusive of the surrounding community. “Until our prices go down, I think we should keep it.”

On several occasions, the leaders of the meeting tried to divert the conversation from the refrigerator and back to more pressing matters, reminding the participants of the urgent financial needs of the cooperative. Where these topics converged was in the central question of whether KCFC should prioritize community mission or best business practices.

A member stood up to share a statement from the co-op’s founder, Lena Helen, who moved to Colorado and is no longer involved with KCFC.

“Over the years as a business owner,” Helen wrote, “I have thought a lot about the nature of co-operatives in general and have come to the conclusion that this model, on this scale, is not not sustainable – and that a board of directors, made up of people who usually have little time to give, will inevitably lead to disorganization.

Mike Richards, who served as the store’s general manager from 2017 to 2019, questioned the ability to execute a long-term strategy at a time when the co-op can’t even pay for day-to-day needs. When several members suggested improving the cafe, he noted that it would require a near doubling of staff that they don’t already have.

“What we’re not here to do is announce that we’re closing,” said board member Jeff Carpineta. “Any time a co-op falls, it’s a major injury to the movement.”

Rumors had been circulating since the start of the year that Kensington Community Food Co-op owner Mike Wade wanted to develop the nearby car park. The rumors had raised concerns about customer parking, as well as outdoor space for co-op events.

At Thursday’s meeting, Schafer said it’s happening: The store is giving up the land and apartments will be built there. City records do not yet show applications for the parcel, which is listed as 9,000 square feet with an estimated value over $1 million.

Schafer touted the new development as a big win for KCFC. She said it would increase foot traffic and free the store from responsibilities such as maintaining the space, covering property tax and worrying about illicit activity in the lot at night. She said the council has already applied for permits from the city to create 30-minute parking spaces in front of the store for quick shoppers, and that many businesses in the city, including grocery stores, are doing very well without car park.

In exchange for parking, Schafer said, the co-op will have the ability to own its liquor license, which it rented from the owner. She said that’s a savings of several thousand dollars every year.

At Thursday’s meeting, several members said the liquor license had not been used enough in the co-op’s three years so far and the bar had been neglected. Member Richard Zurlnick said it looked like “Staples’ break room”.

But Carpineta, the board member, noted there was no money to buy kegs of beer. Richards, the former general manager, noted the extra staff needed to keep the bar running all day.

“Is there a bartender among us who wants to work in the cafe?” someone in the crowd suggested.

Meanwhile, the cooperative still has no permanent leader. Richards stepped down as chief executive in December, and the interim chief executive who took his place recently stepped down. Valerie Baker, assistant manager of the thriving Philadelphia co-op Weaver’s Way, recently took on the role of interim general manager.

Part of the long-term strategy is looking for leadership. Once it has a permanent general manager, KCFC has the option of officially joining the National Co+Op Grocers – the organization that is providing it with a $100,000 loan – and gaining access to lower prices on many products sold by the store.

Current staffer Rivera and co-worker Kyle Corcoran were a bit more positive after Thursday’s meeting. They are both temporarily working at KCFC because they have other plans in the fall, Corcoran said, but in the past they felt there was a disconnect between staff and the board. administration.

“I hadn’t anticipated the amount of transparency that has been released about how events have unfolded over the past two months,” Corcoran said. “There seems to be a plan in place.”

Who can play the king? Representation issues Fuel casting debates.