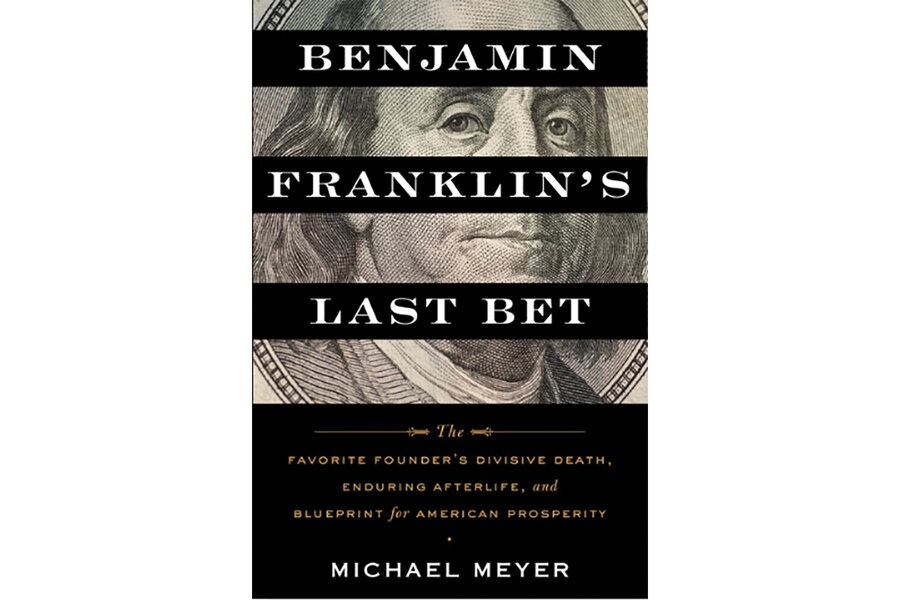 Benjamin Franklin owes his success to intelligence and hard work. He never forgot his roots – he maintained a deep and abiding respect for people who worked with their hands and mastered a craft. And as Michael Meyer recounts in “Benjamin Franklin’s Last Wager: The Dividing Death of the Favorite Founder, the Sustainable Afterlife, and the Plan for American Prosperity,” he believed that skilled workers were essential to the success of the ‘America. “Good apprentices,” Franklin wrote, “are most likely to make good citizens.”

His commitment to the “leather apron class” extended far beyond his death. Just before his death in 1790, Franklin amended his will and left much of his estate to the cities of Philadelphia and Boston.

His plan was simple: the two towns were to lend money in small amounts to merchants who needed funds to start a business. Borrowers had to repay the loans over 10 years at 5% interest. According to Franklin’s calculations, the fund would grow dramatically. After 100 years, a portion of the funds would be distributed by city leaders, and after 200 years, any remaining money would be distributed.

Franklin hoped the initiative would help young blacksmiths, coopers, carpenters, cabinetmakers, and masons get started. In many cases it has, and Meyer shares some of the successes with us. Unsurprisingly, some failed – something Franklin might not have expected.

Today we would call these micro-loans. Nothing like it existed in 1790. Franklin knew firsthand how difficult it could be for a skilled worker to get started. He had been apprenticed to his older brother, James, who ran a printing business in Boston. The young Franklin showed promise, but he resented his brother’s harsh tutelage, broke off his engagement, and fled to Philadelphia, where he opened his own printing business.

Franklin’s bequest was a bold experiment with a long-term horizon “at a time when life expectancies were much shorter than they are today,” says Meyer. It was also a bold idea: it assumed that the municipal leaders of two towns would make, without compensation, small interest-bearing loans to individual merchants for two centuries, collect the repayments, and reinvest the repaid funds. What could go wrong?

Many did, of course, and both cities stumbled. Incompetence, inefficiency, lack of interest, defaults in payment, incomplete records and simple corruption were all involved. And Franklin’s calculations on the growth of silver turned out to be wildly optimistic. But what is surprising is that both cities, after 200 years, had a large amount of money available to invest in public services.

Philadelphia had a balance of $2.3 million in 1990 – far less than Franklin had expected. The city used its money for job training programs for high school graduates. Boston did a better job and there was over $4.6 million left. This town devoted all of its money to the century-old Benjamin Franklin Institute of Technology, an institution that had been founded with money from the first payment of Franklin’s will. The school still stands on Berkeley Street in Boston, and many of its students come from low-income families.

Meyer deftly weaves a biography of Franklin into this story of his philanthropy. You can’t talk about Franklin without acknowledging his scientific experiments, and the author describes many of Franklin’s endeavors, including the lightning rod, bifocals, swimming flippers, and even a musical instrument called a “glass armonica.” “.

Like the other Founders, Franklin had flaws. While he submitted the first petition to Congress to abolish slavery, he owned slaves and never freed a single one. Meyer acknowledges that even the most accessible and forward-thinking founders had shortcomings.

While the author notes that microloans are now a widely accepted strategy to help build small businesses, he doesn’t talk much about the practice as an economic policy tool. He’s more interested in suggesting, without actually saying it, that Franklin was the father of micro-lending.

It only took two centuries for economic and business circles to catch up!