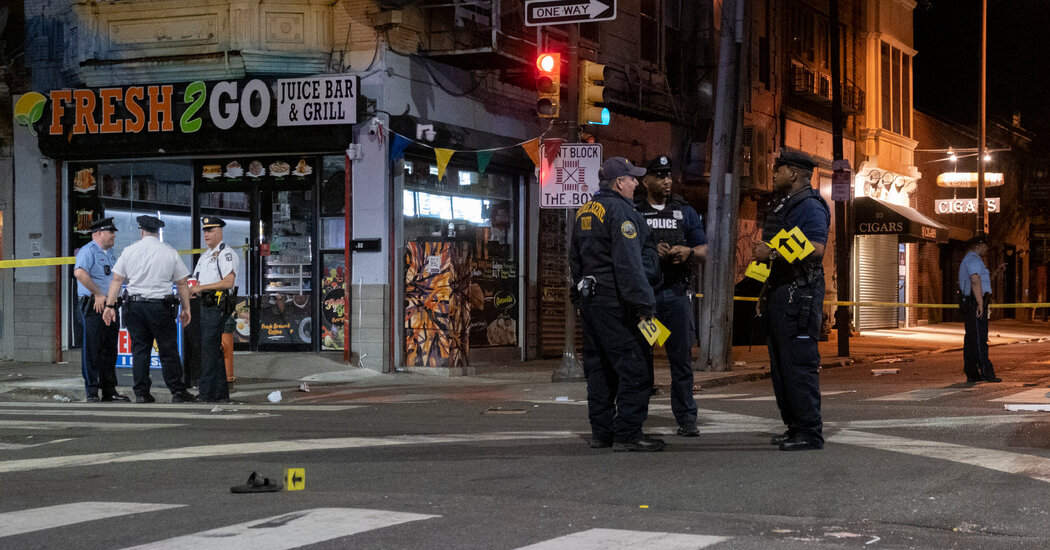 Three people were killed and 11 others injured Saturday night in a shooting in downtown Philadelphia, authorities said.

One of the officers had shot one of the gunmen, but it was unclear if the shooter had been hit, Inspector Pace said.

Fourteen victims were taken to hospitals after the shooting, he said, adding that among them, two men and a woman were pronounced dead on arrival. They are Kristopher Minners, Alexis Quinn and Gregory “Japan” Jackson, according to State Senator Vincent J. Hughes.

Of the 10 patients taken to Thomas Jefferson University Hospital, three had died, three were in stable condition and four had been discharged, said hospital spokesman Damien Woods.

“You can imagine there were hundreds of people taking advantage of South Street, as they do every weekend, when this shooting broke out,” Inspector Pace said.

He said the investigation was continuing and police would review surveillance footage to help identify the gunmen.

At least two firearms were recovered from the scene, including one with an extended magazine, Inspector Pace said, adding that numerous casings were littered around the area.

Philadelphia Mayor Jim Kenney released a statement Sunday morning expressing his condolences to the families of the victims and calling for more gun restrictions. “We cannot accept continued violence as a way of life in our country,” he said. “Until we address the availability and ease of access to firearms, we will always be fighting an uphill battle.”

The shooting was the 10th in Philadelphia during Friday and Saturday, according to Gun Violence Archive, a nonprofit that tracks shooting deaths. The other nine shootings each resulted in a single victim; one resulted in death. There was another shooting on the High Street on Tuesday, resulting in one injury.

Meghan Ford, who was working at a bar down the block after the shooting, said that from the start of the evening shift, “something was in the air”, with swarms of teenagers and l ‘hustle.

The gun violence records have counted nearly 240 mass shootings so far this year, defined as a shooting in which four or more people were killed or injured. Shootings in the United States have risen sharply during the pandemic.

This weekend’s wave of violence followed a string of shootings that captured national attention, including the school shooting in Uvalde, Texas, and the racist attack on supermarket shoppers in Buffalo, in New York State. These incidents led to renewed interest in gun control legislation in Congress.

Senators continued to work through the weekend to see if they could reach a compromise on legislation expanding the national background check system, as well as sending money for mental health resources, school safety and the implementation of red flag laws statewide.

Two veterans of failed negotiations in the past – Sen. Chris Murphy of Connecticut, a Democrat, and Pat Toomey of Pennsylvania, a Republican – said in separate interviews on Sunday that they believe they are closer to a deal than compared to previous attempts.

“This is a federal government test of whether we’re going to indulge in a moment of fierce anxiety among the American public, so we’re closer than ever,” Mr Murphy said, speaking on “the state of the Union” from CNN. ”

Mr. Murphy acknowledged that an assault weapons ban, a universal background check law or other restrictions on guns will not be part of a final compromise in order to win the necessary Republican votes, even as House Democrats prepare to force a round of votes on individual firearms. bills that don’t have Republican support.

Mr Toomey, who watched his own party obstruct the background check deal he helped strike with Democrats after the Sandy Hook shooting, said he hoped to see at least half of the Republican conference in the Senate backing a final deal.